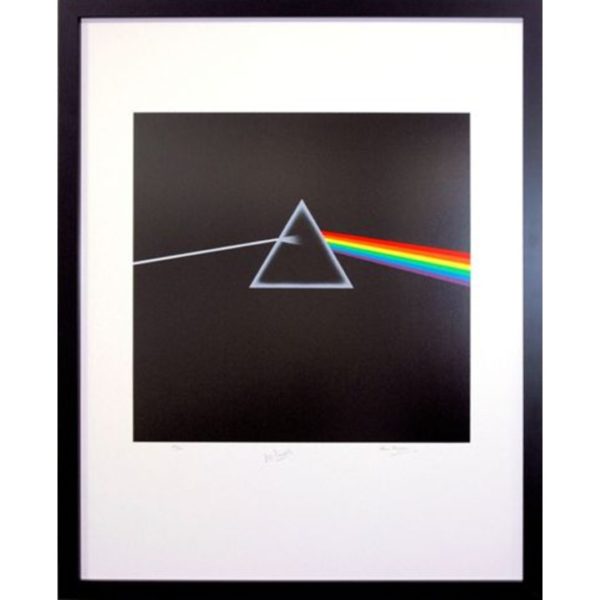 Date: 2000 Signed By: Storm Thorgerson Edition: From the edition of 295 VERY LOW AVAILABILITY Produced by Storm Thorgerson and Aubrey Powell(Hipgnosis)Dark Side Of The Moonis Pink Floyds commercial-meets- conceptual equinox. A masterpiece production by both Pink Floyd and Storm Thorgerson, with well over thirty five million copies sold to date. Of minor significance was the complete appropriateness of the Dark Side Of The Moon artwork to the record. Says Storm Thorgerson, the Dark Side Of The Moon design is simply a mechanical tint lay, which means we drew outline shapes, black on white, and indicated what colours were to appear when printed. The prisms were airbrushed black on white and reversed by the printer. The Dark Side Of The Moon idea itself was cunningly cobbled by from a standard physics textbook, which illustrated light passing through a prism. Of significance was the simple, elegant layout against black – standard textbook illustrations did not do this. And then to connect this idea to Pink Floyd’s live show, which was famous for its lighting, and subsequently to connect this to ambition and madness, themes Roger was exploring in the lyrics hence the prism, the triangle and the pyramids. It all connects, somehow, somewhere.. Says David Gilmour, We knew that the package the record and the cover and everything together was going to be far, far stronger than anything we had done before. And so The Dark Side Of The Moon came to be. Dark Side Of The Moon, the No.1 Billboard album in March of 1973, this recording went on to achieve a record 741 weeks or 14 whole years on the Top 200 Albums chart, The longest chart album ever, beating its nearest rival by five years!

Edition: From the edition of 295